Edibles dosage chart – How strong is your cannabis-infused edible?

Hash used to be an umbrella term that encompassed a single type of product, but now, thanks to legal cannabis hitting the mainstream market en masse, a vast array of different types of hash have been developed, each with their own specializations and flavors.

This time-honored practice was thought to be one of the very first forms of refined cannabis and has been enjoyed throughout human history for centuries.

Modern technology has opened doors to experiment with new ways to improve and refine cannabis extracts in many ways, leading to the production of your favorite rosins, shatters, and honey oils.

Without any further delay, let’s jump into it and figure out which type of hash is best for you!

The Different Types of Hash

Like growing your own cannabis, there remains the possibility of having a large amount of variance between each batch of hash. Anything as simple as using weed trim to the actual genetics of the strain can have a profound impact on the scent, taste, and overall feel of the end product. 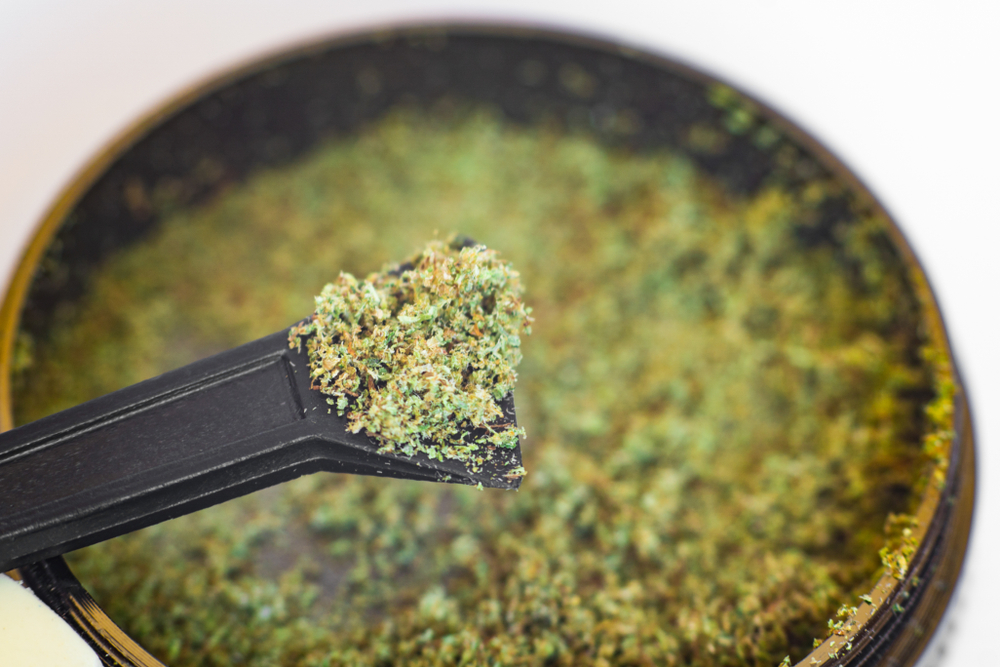 If you’re here digging around about hash, you’re probably already familiar with kief.

To give you a quick refresher, kief is the tiny crystalline resin glands littered all over the surface of your bud.

They’re known to pack a punch when it comes to terpenes and cannabinoids, so a little goes a long way. The good news is, kief is incredibly easy to obtain and can be captured by a three-chamber grinder by simply grinding and handling your bud.

For those who don’t have access to any specialized equipment at home, a decent amount of kief can easily be manually heated and pressed to create some hash.

As a matter of fact, many people at home use a technique to make what is known as “shoe hash.” This method of making hash involves no expensive equipment and can be done with almost no equipment.

Simply put your kief into a plastic bag or wrap it in tin foil or parchment paper, and then stow the packaged kief in the sole of your shoe. This allows you to fully press your kief with your full body weight with having to put much force in it. Allow gravity to do all the work.

Keep in mind, this type of hash is somewhat of a jury-rigged variant, so don’t go in expecting the world. This is a great way to make hash if you don’t have access to proper equipment, but the end product tends to be of lower quality and a bit flakier than the more high-end variants (also make sure your shoes are clean)!

If you’re looking for that “old school cool,” finger hash might be the way to go. Having its roots in India, this is probably one of the most time-honoured methods of creating hash out there.

Finger hash was originally made by cannabis cultivators by pressing the kief that had fallen off during the procurement of their cannabis plants. They would usually take a dull knife or use their fingers, hence the name, to group the kief that accumulated in their hands and then compress it all to form a hash.

The combined heat and pressure formed from the rubbing their hands together formed a type of sheen on the kief and allowed it to darken much more than other types while also softening it into a notably smooth and somewhat tender texture.

Though this method might seem simple at first glance, it’s actually quite a bit more of a laborious process and can take hours to be done correctly.  In spite of this, you get to experience creating and enjoying an incredibly smooth artisanal variant of hash that has been the bread and butter of many generations previously, so in the end, it’s probably worth it.

A uniquely satisfying looking hash that’s known for its high quality and beautifully malleable texture. These palm-sized hash balls are sometimes called Nepalese Temple Balls and were extremely popular in the 1960s and 70s at the start of the hash boom as they have been a staple in Amsterdam coffee shops ever since.

Cultivators were known to grow their Indica-dominant cannabis crops outdoors in the Nepali mountains. To create Nepalese Hash, they would rub their dried flowers with their hands, releasing the resin and powder and accumulating it on their palms.

As the resin and powder come together, the heat from the constant friction would active the compounds within the resin and allow it to be malleable, helping cultivators shape it into a ball. Once a fair amount of resin and powder has accumulated to roughly a palm-sized amount, a Nepalese Temple Ball is formed.

Unfortunately, this method of creating hash is a rare sight in the North American market, however, that doesn’t stop you from making it yourself. If you’re lucky enough to come across one of these in an online dispensary Canada, do not rob yourself of the opportunity of trying one, you won’t regret it.

A modern take on hash. Clean, simple, and easy to produce. Bubble hash is known for its refined and filtered taste.

To make Bubble hash, you’ll need is some water, ice, a large bucket, and some bubble bags. To start, the process begins with preparing an ice bath, and then placing a large amount of high-quality bud into the bubble bags.

Once the bubble bags are filled with cannabis, they are submerged into the ice bath and then agitated. Agitating the mixture causes friction that will help in removing a large amount of the kief from the buds.

Once a large amount of kief has been extracted, the remaining cannabis buds are removed, and the filtered kief is run through several fine, mesh filters to remove any excess plant matter. Once everything is fully strained, the filtered kief is then scraped and collected and left to settle on drying racks.

Concluding Thoughts on Types of Hash

There you have it, a basic guide to the different types of hash and how they’re made. But reading about hash can only take you so far, don’t be afraid to go out and try each and every single one, because to tell you the truth, you won’t truly know how much you like something until you try it.

We guarantee that your local dispensary’s hash selection will pale in comparison to an online dispensary, so why not try to buy weed online and try them out for yourself?

Besides, most of the fun is in experiencing it.

As always, happy smoking and be sure to visit our site for more weed tips and tricks!

Edibles dosage chart – How strong is your cannabis-infused edible?